to curb your appetite -- a couple sketches

i had to keep a sketchbook (actually, 2..) for my classes this past semester. it was exhausting, but i pumped out some cool ideas. im planning on sharing some of them... i just gotta run them through my scanner. in the meantime, i thought i would share a couple sketches with you guys. 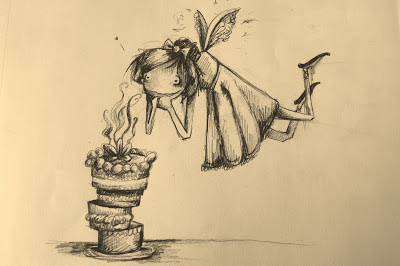 i drew this one on valentines day. probably cuz all i wanted to eat was cake or chocolate or something. so this is a picture of a girl who is in love with cake. thats basically who my valentine was anyways. cake will never let you down ;)


the weirdest. dont worry, i know. just so you dont think im crazy (you already know i am..) there was a prompt for this: "stinky, angry panda bear tripping while ice skating." the story behind this is that mr. panda here loves to ice skate.. the only problem is he hates the attire he is required to wear. he spent so much time preparing his routine he forgot to shower! and during his recital, unfortunately, he tripped and fell. poor guy, it happens to the best of us.

here are just a few older pieces i found at my mom's house. i like to keep track of my old work because i think it is important to reflect back and see how much progress you have made, kind of like a check point to help you see where you are at. these next 3 were pieces i was very proud of back in junior high/high school. 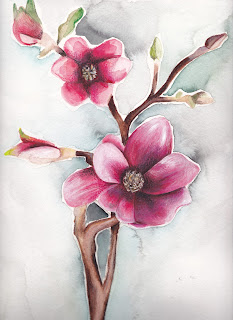 attempt at cherry blossoms.. was on display at a charity event back in 2009! was glad to be able to contribute to that :) 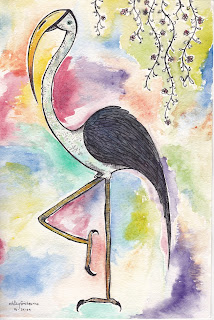 this crane was the first time i experimented with ink and watercolor... ive been in love with it ever since! 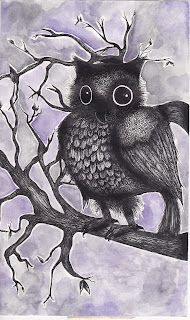 this halloween owl was done for my mom. ink and watercolor, i had a lot of fun making his feathers and over-sized eyeballs haha.

like what you see? i knew it. follow my blog by either adding me on google friend connect or type your email into the bar provided to get emailed updates of my blog!
thanks for your love, support, and smiling faces!

cheers,
ash
Posted by Unknown at 2:39 PM No comments:

there's a first time for everything

my first attempt at a contour self-portrait:

self-portraits are always weird for me...at least the ones they make you do in junior high/high school. they always want them to be so accurate... and it makes me feel uncomfortable staring at my face for so long. anyways, for a class last semester, we were asked to do a 5 minute contour of our face while looking in a mirror. i did this: 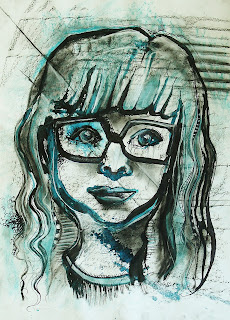 probably the only self-portrait ive done that ive liked. its so weird and kinda looks like Daria. although the features arent completely 100% accurate, i feel like i did a good job of capturing my disposition and i got the point across 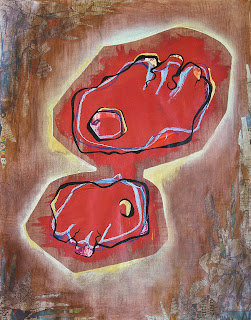 this one was for the same class as above, and i have honestly never tried to work abstract before. i could sit and explain the process of how i came about this piece, but ill spare you the extensive details. basically, i started by drawing a seashell, and then at the end, it turned into a heart/organ thingy. i guess you could say it is a commentary on relationships... but i mostly did it cuz i like guts.

my first attempt at a full-page illustration: 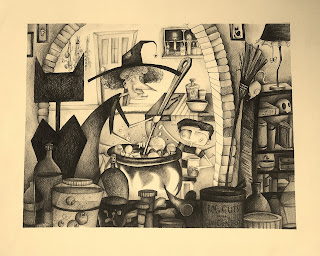 this was the final for my imagination class... we were given a small paragraph of a story and asked to illustrate it. we had to do character designs, object sketches and map out our composition. it was all brand new in my mind, nothing i had ever done before... and although it was painful to push through at times, i think i had a good outcome. i might post the sketching process for this one another day, its actually pretty interesting.

i just found these on my computer, okay?

i love to do commissioned work... its always really fun.
so here are a couple of pieces i did for projects for people a while back. 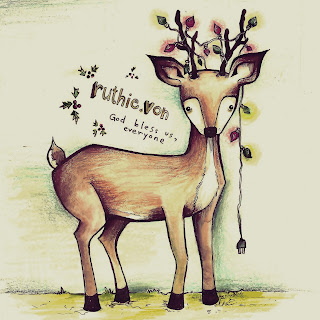 this is a cd cover i did for my extremely talented friend, Ruth Gonzalez. i sang in a couple of the songs on her christmas album and she was kind enough to let me design her album cover. give her a listen! 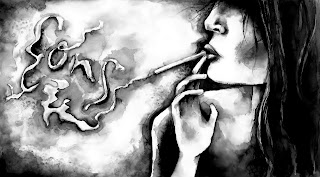 i was asked to design a sticker design for my friends band called Eons, so that was pretty rad! i just drew the image by hand, inked it, scanned it, and then edited it a bit with photoshop. ive never really done digital work before, so it was a new experience. 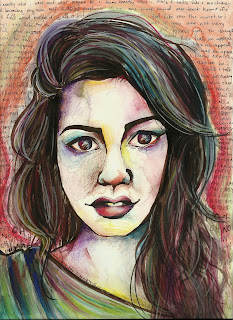 i just did this for fun. if you havent heard of Marina and the Diamonds, then you should check her out! she is super fun, acid pop-sish music. i painted this a while back because i wanted to try and do a strange-colored portrait of someone. i like the way it turned out. i actually just barely went to her concert last night, and she was awesome!

hope you enjoyed some of the more random pieces ive done. let me know your thoughts!

subscribe by email to get updates of my blog!
thanks guys!

cheers,
ashley fairbourne
Posted by Unknown at 1:11 PM No comments:

this was my midterm for my imagination class last semester. its just a simple character design of a cat that suffers from insomnia. not a great pic, i know. its cut off a little at the top, but you get the idea. 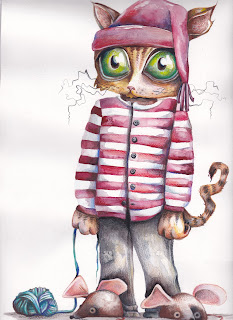 what do cats with insomnia even do? basically nothing. his life must suck.

Posted by Unknown at 1:55 PM No comments:

i have an insane amount of art just hanging out everywhere. the funny thing is that i don't really think, "woah, this is awesome" for every piece i finish. it's not that they aren't acceptable or good ideas, it's just they aren't where i want them to be yet... so i usually am hesitant to parade them around.
but nevertheless! i wanted to show a couple character designs that i did during this past spring semester for my imagination and visual literacy class (which by the way, is an insanely fun class!). 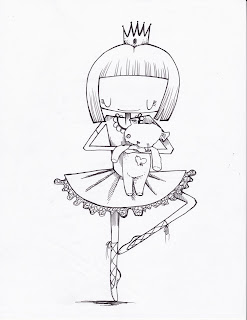 during the beginning of the semester, we were asked to pretend that we were on death row and we could draw one more thing before we died. a lot of people drew devilish beings and Death himself, but for some reason, that never crossed my mind. i drew a ballerina with a teddy bear. why? if i had a specific reason i would tell you, but it was just cuz i wanted to :) id like to re-work this piece and add color... maybe an acrylic painting or watercolor. 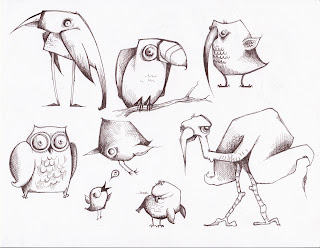 another day in class we had to design 8-10 bird characters and these are what i came up with. i really dig birds, they are so fun to draw and are practically cuties. i added a little touch of weirdness to them though (no surprise there.) 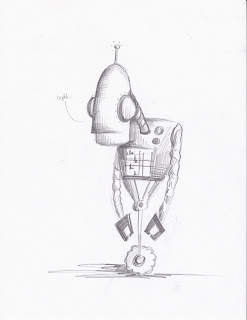 not much to talk about with this piece... other than we were asked to draw a robot. i made mine depressed. for some reason, depressed robots entertain me. its probably cuz robots shouldn't be able to feel emotion, right? well this sucker does. poor little guy.

this class definitely helped me out with simplifying shapes and communicating more efficiently visually. i thoroughly enjoyed the assignments... minus the 200 sketches i had to do, of course. but who even likes that?

ashley
Posted by Unknown at 5:21 PM No comments:

hello!
let me just introduce myself real quick-like.
my name is Ashley Fairbourne and i love to draw.
if you know me, you know that.
i have since as far back as i can remember...
anywho! this blog is going to revolve around sharing my art with you guys.
so lets get to it! 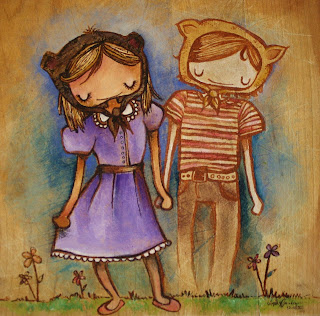 this piece is a newer one, titled, "Boys and Ghouls" (working title)... i found an old cutting board in the basement of my house when i moved and decided to paint on it. why? i dunno! just sometimes, it gets old painting on plain old paper or canvas. anyways, i was super fascinated by it mostly cuz the texture was all choppy and had divots in it from knives. i used watercolor and some black and sepia ink. i feel like it turned out pretty well for the most part, there are just a few things that i wanna tweak.
also, just as a side note, the things on their heads? those are called spirit hoods. i can exactly place why i am so obsessed with drawing them on my characters, but its probably cuz its cute. heh.

hopefully this, along with a few others, will be hung up in a local coffee shop within the next month. 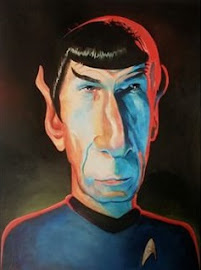 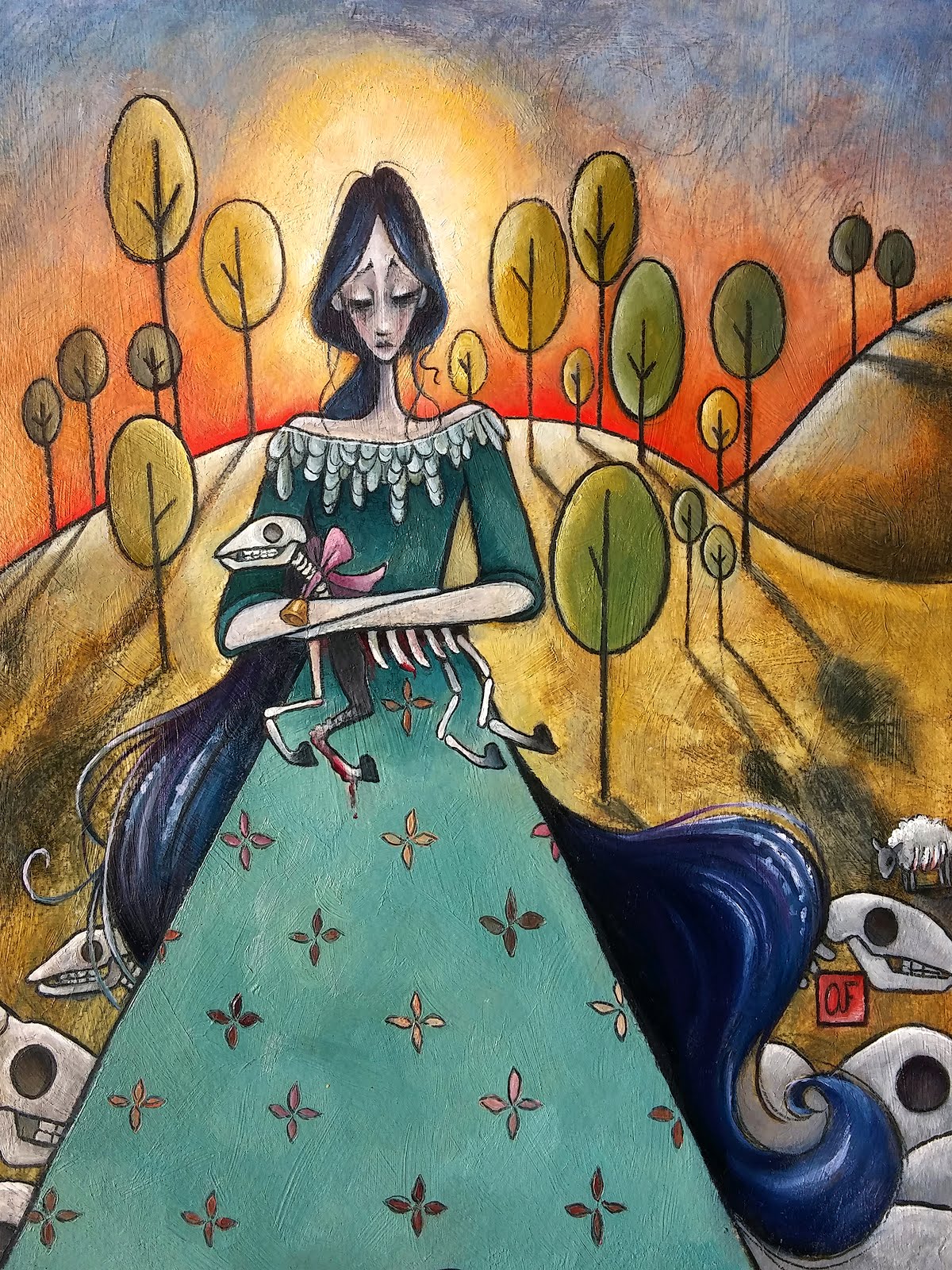